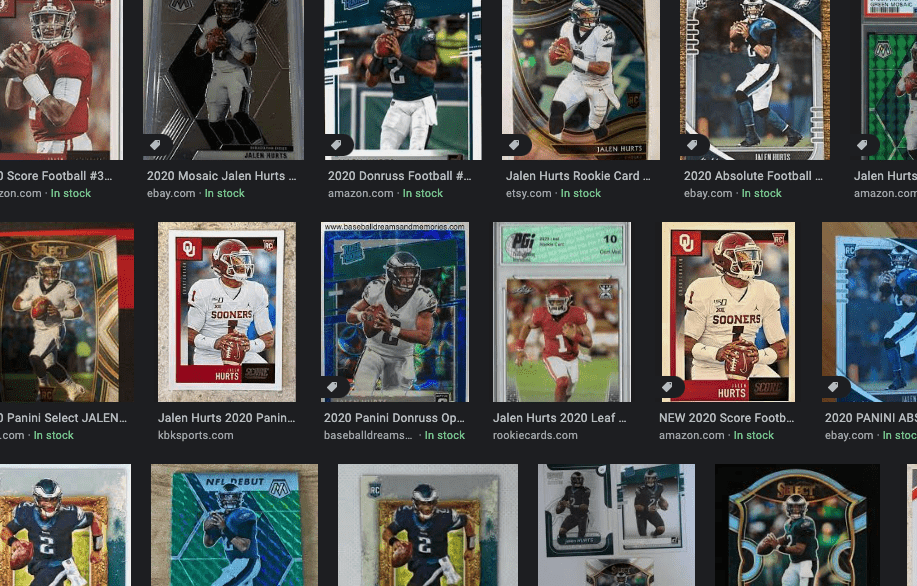 We are going to look at 5 of the most sought-after Jalen Hurts rookies on the market. This blog post will discuss each card’s different features and values.

So whether you want to be a collector or just invest in something with terrific potential, read on!

While there are a few card companies that are still promoting the 2021 card season as his rookie year, his Jalen Hurts rookie card was actually released in 2020 by several NFL card manufacturers.

Which Jalen Hurts Rookie Card Is The Best?

The 2020 card releases saw a lot of great rookie cards, but let’s look at our favorite picks of the 2020 releases for Jalen Hurts.

Luckily, the values on these cards have remained quite low, since Hurts does not yet have some of the same experience as higher-priced quarterbacks. But if 2022 continues to see the Eagles winning, that will surely change.

Our top pick for the best Jalen Hurts rookie card is not the most expensive football card on the list or the hardest to find.

However, there is something special about the 2020 Panini Mosaic Jalen Hurts rookie card.

Because of the popularity of the Panini Mosaic Prizm series over the past several years, nearly every sought after rookie card has a Prizm card that is a top target for football card collectors.

The Panini Prizm Jalen Hurts rookie card is no exception.

Because of all the possible Jalen Hurts rookie card variations, including the ultra-rare Black 1-of-1, and the Choice Mosiac Parallel, the Nebula, which is also a 1-of-1.

And the cool thing about this card, is there are quite a few PSA-graded options on eBay still at decent prices due to the decent inventory, so snagging one of those won’t put you out of house and home.

Unless, of course, you are going for the Black card.

There are several reasons we really like the 2020 Select Jalen Hurts rookie card, even just the base.

But if I am being honest, there is 1 main reason we like this Jalen Hurts rookie card…the price.

It is one of, if not THE most inexpensive Jalen Hurts rookie card you can buy, often found for under $5 on eBay.

At that price, the card is probably a minimal investment opportunity, but it is still a great way to get your hands on a Jalen Hurts RC at a very low price.

And for collectors who are wanting something a bit more pricey than the base rookie card, there are several available variations of this card to choose from, including the Green/Black Snakeskin short print to 2, and the Select Black 1-of-1.

The card itself is a great-looking card, and for those who are wanting an entry-level rookie card for their collection, this Jalen Hurts football is a great choice.

For any football rookie card made in the last several years, it’s hard to ignore the extremely popular Rated Rookie series.

Just as we have seen with other rookies, Jalen Hurts also has a Rated Rookie card which is available.

The great news is that this Jalen Hurts rookie card, similar to the Select above, is also still quite inexpensive, with even the PSA 10 rookie cards going for between $50 and $75, which is an insane deal for such a talented player.

If you are more of the type of collector who prefers the variations, there are a ton of those in this set, down to the 1-of-1 Back Die Cut.

Obviously, those cards will go for a bit more coin, but even still, these cards are on the verge of popping in demand of Hurts continues to play at a high level.

The 2020 Panini Contenders Optic Jalen Hurts rookie card is one of the most popular autograph rookie cards you can find,

We can chalk a lot of that hype to the high demand for Panini Contenders autographed rookie cards, which have become a collecting staple for football card collecting for several years.

But along with that hype comes an increased price tag, selling often on eBay for between $500 and $750, depending on the card condition.

Supply for this Jalen Hurts rookie card can sometimes be an issue, which is why the Panini Contenders Wild Card is also a great card to own, with a similar design, but also similar demand.

From time to time, one of the card parallels will show up on eBay, usually demanding a higher price tag.

But, for collecting purposes, we like the base auto just fine enough.

That said, we would take a parallel in a heartbeat.

Score sometimes gets overlooked on these lists, but not when we are talking about the best Jalen Hurts rookie cards.

In 2020, Score released a Jalen Hurts auto rookie card which has become one of his most iconic (and sought-after) rookie cards.

This is due to two things. First, the card is autographed. While it’s not an on-card auto, it’s still pretty cool.

Second is the available variations. Score released several versions of this card in 2020, including the popular Artist’s Proof rookie cards, with several color variations available.

However, these Jalen Hurts rookie cards are becoming quite scarce, especially as Jalen becomes a star in the NFL.

Who Is Jalen Hurts?

Jalen Hurts is a quarterback who currently plays for the Philadelphia Eagles.

He was drafted by the Eagles in the second round of the 2020 NFL Draft. Prior to playing in the NFL, Hurts played college football for the University of Alabama and Oklahoma Sooners.

He is a two-time Heisman Trophy finalist and was named the Associated Press College Football Player of the Year in 2016.

As a member of the Eagles, Hurts has appeared in two regular-season games and one playoff game prior to the 2022 football season, where he took the starting quarterback job and is having a stellar season.

He recorded his first career victory as a starter in the wild-card round of the 2020 playoffs against the Chicago Bears.

He grew up in a single-parent household with his mother and two sisters.

As a child, Jalen was diagnosed with ADHD and struggled in school. However, he found solace in sports and eventually went on to play football and basketball at Alief Taylor High School.

After graduation, he enrolled at the University of Oklahoma, where he became the starting quarterback for the Sooners.

In 2019, he was drafted by the Philadelphia Eagles in the second round of the NFL Draft.

Despite his challenges growing up, Jalen has overcome adversity to become one of the top quarterbacks in the NFL.

Jalen Hurts is a college football player who has had an impressive career thus far. As a quarterback for the University of Alabama, he has led his team to two National Championships. He was also named the SEC Offensive Player of the Year in 2016.

Despite not being selected in the first round of the NFL draft, Jalen Hurts has shown that he has what it takes to be a successful professional football player.

He was signed by the Philadelphia Eagles and has since taken the starting quarterback position.

With his natural talent and drive to succeed, there is no doubt that Jalen Hurts will have a bright future in football.

Hurts, who was drafted in the second round of the 2020 NFL Draft, completed 17 of 30 passes for 167 yards and one touchdown. He also ran for 56 yards and another touchdown.

The Eagles were down by 12 points in the fourth quarter but Hurts led them on two scoring drives to seal the victory. It was an impressive debut for the 22-year-old, who showed poise and playmaking ability while facing a tough opponent on the road.

With starting quarterback Carson Wentz sidelined with an injury, Hurts will have an opportunity to build on his strong performance in the coming weeks.

And if he can keep leading the Eagles to wins, he may just cement his status as the team’s franchise quarterback of the future.

Jalen attended the University of Oklahoma.

Jalen Hurts is from Houston, Texas.

His jersey number is #1. 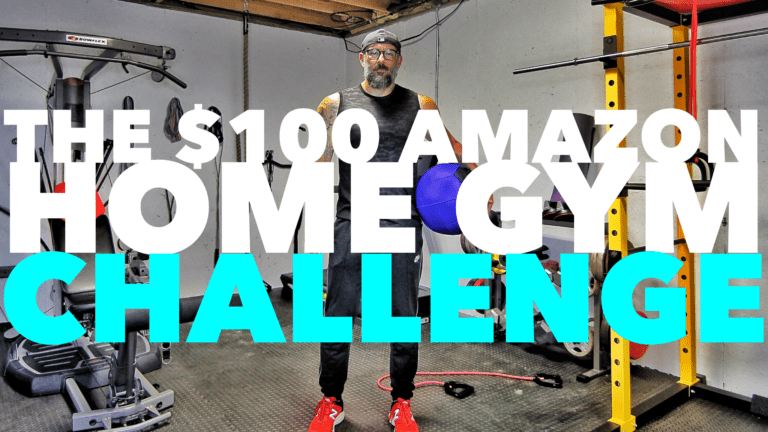 Home gyms present a way to do so comfortably for people who are stepping into fitness for the first time—dipping their toes in the water without the fear of being judged or feeling awkward. This is why so many decide to build a home gym. However, trying to develop the “right” tools for building a… 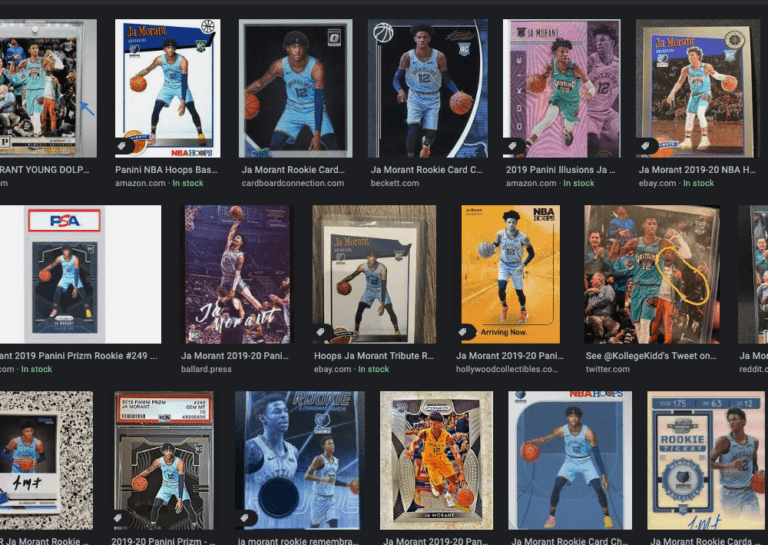 Everyone wants a Ja Morant rookie card because there is no doubt that Ja Morant is one of the most exciting young players in the NBA today. He has already made a name for himself, and there is no telling what he will be able to achieve in the future. This article will look at… 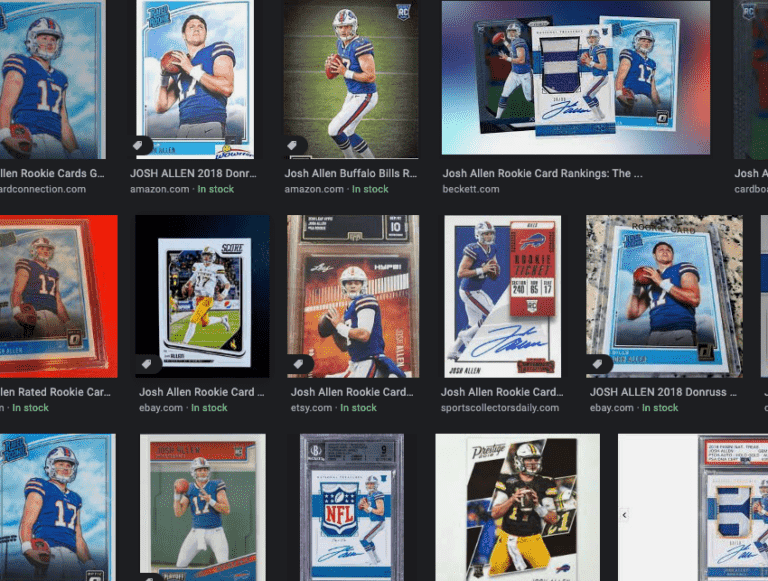 As an Amazon affiliate, I might make a commission off purchases made via links on this site, at no additional cost to you.